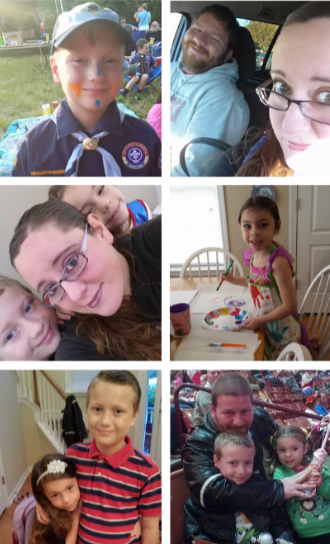 Sophie has contributed her advice and thoughts to a number of articles on Feeding My Kid.

Born and raised in Caen, France until she was 12 years old. She then immigrated to the United States with her family in 1999. Sophie met her husband in high school and they were married in 2006 in Titusville, Florida. She then became a Navy wife for 7 years.

During those 7 years, her and her husband welcomed Lukas in 2007 and Keira in 2010. Sophie’s number 1 priority is her family. Lukas was born 11 weeks premature which presented some eating challenges. As he grew older, Lukas developed a condition called Dysphagia.

However, after 3 years of hard work and therapy, he was discharge at 4 years old, right after his sister was born. Ever since, he has been doing an amazing job but still has a hard time with some textures and swallowing.

Keira was born healthy and has no problem but she can be a picky eater who only want to eat snacks…. Well…. Mostly goldfish….

Sophie currently lives in Greenville, South Carolina. She graduated from the University of Central Florida with a Bachelor’s in Criminal Justice. She is hoping to get back to school within a year or 2 to get her Master’s in Social Services.

Her kids and her husband are her world. She loves to be hands on with them and get them involved in the kitchen, with arts and crafts, gardening, and much more!

Take life with a grain of salt and enjoy the little moments.

Renee Seltzer - May 26, 2017 0
I love banana bread, it's such an easy way to use overripe bananas and tastes amazing! It's also not as rich as a chocolate...

Get Your Picky Eater to Eat Healthier. Professional Advice from a...

Paleo Egg Salad Recipe for an Easy Weekday Lunch or a...